"Call Your Military Hero Day" is not a thing

Around midday on July 3, 2019, I received an e-mail from the "Cox for Governor" campaign. I actually went to high school with Spencer Cox and I'm proud to say that I produced his very first campaign ad when he ran for President... of the class of 1993 at North Sanpete High School.

The subject of the email read: "Spencer is Calling Utah's Military Heroes." Its content included the following paragraph:

"Reply to this email with a name, phone number, and a little bit about their military service, and they might just get a phone call from the Lt. Governor!..." (emphasis added)


I replied with the following:

I’m going to be frank.

As a veteran, it makes me very uncomfortable when people say “Thank you for your service.”

The first time I heard it, I was taken aback because I did not feel that I needed—or even deserved—to be personally thanked. I still don’t feel that way. Sure, I volunteered but it wasn’t like I saved up to join the Navy. I’ll concede that bootcamp was rough, but I still got paid for it. My military salary wasn’t great but it was a steady income and I was compensated for all five years that I served… despite the uncanny feeling I got that were it not for the fact that I was under contract, I probably would have been fired. Of course, that didn’t stop me from taking advantage of education benefits that used to be enough to pay for school AND rent AND food but now is just a pittance to offset a tiny portion of the debt one is expected to graduate with anyway. I still rely on the VA for my healthcare—without it, I’d probably have killed myself years ago—but I still have copays.

Most of the people that I knew in the service didn’t sign up to be heroes, we signed up because it was better than being unemployed. We signed up because we were brought up to believe that college was the only way we could make something of ourselves when we decided to get out (not realizing how much pressure would be placed on us to reenlist or to “extend for orders”). We signed up because recruiters will say anything to get a gullible, eighteen-year-old kid right out of high school to sign on the dotted line so they can meet their quotas.

One of the problems with having an all-volunteer military is that there is no sense of shared sacrifice with civilians. No sense of relief that maybe because one person volunteered it might have made it less likely for someone else’s number to have come up for the draft. I honestly don’t know if that’s how the draft works but the U.S. military hasn’t conscripted anyone into its ranks since 1973. So, when soldiers die or come home wounded (visibly or not), there is no sense of “There but for the grace of God—or the odds…” Just, well, “he knew what he signed up for…” Which only makes “Thank you for your service” sound more and more like a condescending afterthought. Spoken more to make the people who say it feel good about themselves than to make any veteran feel good about the job that they were already paid (poorly) to do… and sacrificed for in other ways that most civilians could never understand.

I’ll put up with it on Veterans Day for the sake of a free meal and an oil change but on the 4th of July (or thereabouts)? It’s called “Independence Day” because we are celebrating our independence as a nation, not the military or veterans. That a military campaign was a necessary part of achieving that independence was incidental and hardly unique to our history. The only thing worse is being thanked for one’s service on Memorial Day… which is supposed to be about honoring those who died while serving their country.

In response to your request for suggestions on who you should call, I do have a few phone numbers for you to consider.

Just call any or all of these phone numbers and ask to speak with a veteran. I’m sure that you’ll be able to speak with one right away. I’m not 100% sure but I’m definitely 10% sure.

A few years ago, I finally had enough of being thanked for something that I was already compensated for. So, I had some business cards printed and I keep some on me at all times. Whenever someone learns of my status as a veteran and says, “Thank you for your service,” I reply with, “That’s not necessary,” and hand them this business card: 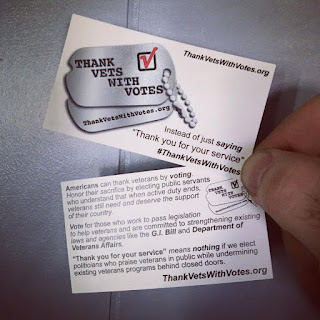 Respectfully and with all sincerity,


I blind carbon-coppied (BCC'd) the e-mail to friends and family, prompting the following text exchange: 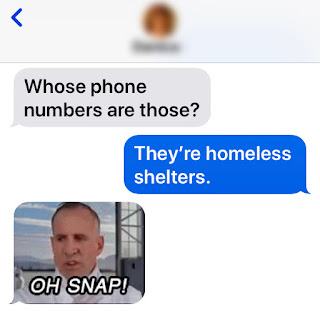